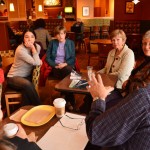 “This expands the Arts Council in a wonderful way,” said Kathy Bentz, PWC Arts Liaison. “For 20 years, the council has represented dance, music, visual art and theatre, but never literature. As soon as we opened membership to individual writers in January 2011, a small trickle became a gushing stream. We welcome their talents!”

Four of those original individual writer members, Pete Pazmino, Sheila Lamb, Katherine Mercurio Gotthardt and Cindy Brookshire, founded Write by the Rails, a networking group for writers in Prince William, Manassas and Manassas Park.  Their first gathering at Okra’s in Old Town Manassas in August 2011 brought 12 writers together, and the group has rapidly grown to 150 members through a Facebook group and the website www.writebytherails.org.  Group members host bi-monthly “meet and greets” throughout the county, pool money to rent book sale tables at community events and promote book signings, manuscript groups and write-ins on the website’s calendar.

Since earning the Virginia Writers Club’s charter, Write by the Rails hosts monthly meetings at Trinity Episcopal Church, 9325 West Street, Old Town Manassas on the third Thursday of each month at 7 pm.  The Jan. 17 speaker is William Golden of PrinceWilliamLife.com, who will talk about setting up author websites and blogs.  The group also honors VWC’s mission to engage young writers by spreading the word about the state club’s 2013 Teen Golden Nib Contest, which has a deadline of March 1.

Members currently review books for Prince William Livingmagazine’s online “Book Nook” column.  Twenty-two members are featured in New Departures, an anthology formatted by Manassas author Claudia LeFeve, who, in 2012, sold 7,700 ebook copies of her first three Travelers series books (PARALLEL, PARADOX and PARADIGM) on everything from Amazon Kindle to Barnes & Noble Nook and Apple iBooks and iTunes.  LeFeve explained indie authors are estimated to sell, on average, only 100 to 200 books a year.  Even traditionally published mid-list or debut authors can expect to sell between 1,000 to 5,000 copies.

One of the authors featured in New Departures is Robert Bausch, an NVCC-Woodbridge professor who is planning to lead his third annual Woodbridge Writers Retreat on May 15-18 with his brother, novelist Richard Bausch and Tom Zoellner, author of Uranium: War, Energy, and the Rock That Shaped the World. The cost is $650 and only 18 slots are available. More information is available at www.robertbausch.org.  Another author featured in the anthology is Gainesville writer June Pair Kilpatrick, whose memoir, Wasps in the Bedroom, Butter in the Well: Growing Up during the Great Depression, will be the subject of a Book Talk at The Manassas Museum on Sunday, Jan. 27 at 2 p.m.

There are no dues to join Write by the Rails, however all local authors are encouraged to join the Virginia Writers Club to amplify their local art to the state level.  For more information, email writebytherails@gmail.com.