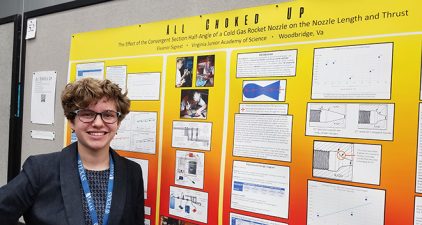 Forest Park High School freshman Eleanor Sigrest was recently inducted as a lifetime fellow of the American Junior Academy of Science (AJAS), America’s only honor research society for high school scientists.  The ceremony took place in Austin, Texas, where Sigrest attended the American Association for the Advancement of Science Conference. Sigrest was awarded the invitation through winning best research award at the 2017 Virginia Junior Academy of Science Symposium, an award she earned as an eighth-grader at Benton Middle School.

Benton Middle eighth-grade science teacher Debra Peterman accompanied Sigrest at the five-day conference. A lecture about research experiments on the International Space Station given by Dr. Ellen Ochoa, a former NASA astronaut, was a highpoint of Sigrest’s experience.  After the lecture she had the pleasure of meeting Dr. Ochoa and snapped a selfie.

“I want to be the first person on Mars, and AJAS helped me connect to my goal. Meeting professionals in my area of research, talking with them, and building relationships with them was so much fun,” Sigrest said. “Everywhere I went at AJAS, there were people just like me; other kids who were passionate about STEM. I made lifelong friends and created exciting, scientific and awe-inspiring memories.”

Sigrest presented her own research and discovered new interests that included bioengineering, Nano mechanics and optics while touring the University of Austin. She also saw innovations in artificial intelligence such as how the technology programs itself and teaches itself new jobs and tasks.

“She is truly one of a kind,” Peterman said of her former student.