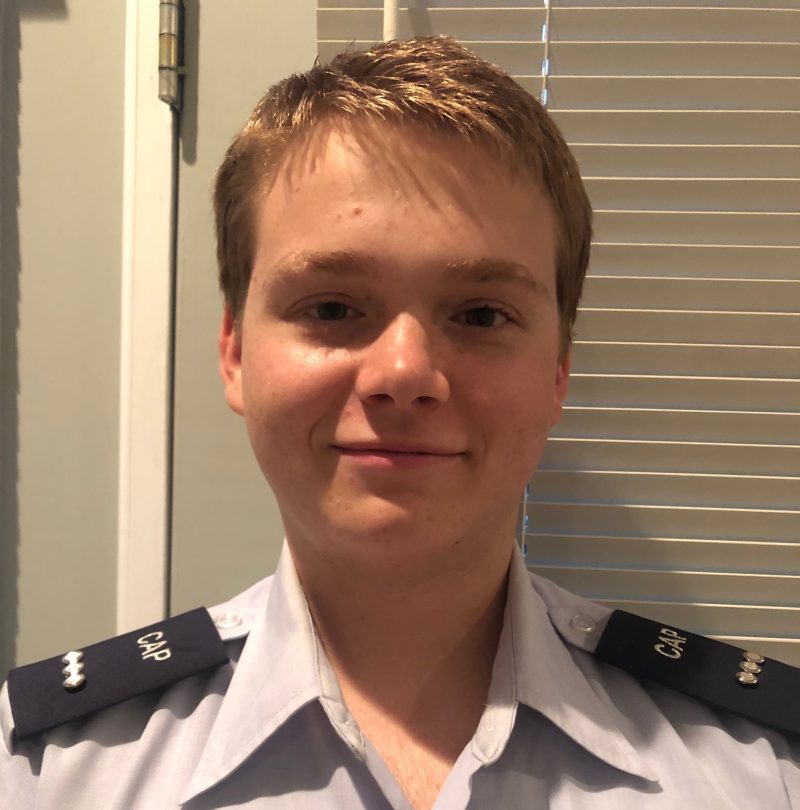 Zarling, a rising senior at Liberty University Online Academy, has been the deputy cadet commander for the past year before assuming command from Hince.

“It has been a pleasure serving as the deputy cadet commander,” Zarling told the squadron during the ceremony. “It is a unique opportunity to serve as the cadet commander. I hope to offer the professionalism that was offered to me by the leadership.”

Following more than 14 months of weekly online meetings due to the pandemic, Zarling said that it is very important to provide a smooth transition back to in-person meetings.

“I’m excited for the challenge and opportunity to lead the squadron back to in-person meetings,” Zarling said. “All the (cadet) cadre, myself included, need a great deal of training in order to successfully transition back to an in-person environment, so I’m nervous and excited for that challenge.”

In an emotional speech to the squadron, Hince said that it has been a great honor to be able to wear the uniform and represent the Civil Air Patrol. “There are so many different avenues available for cadets to learn and to become the people we want to be, to learn the skills we will need in the future,” he said. “It has been my great honor to be the cadet commander for this amazing squadron. I have great faith in Capt. Zarling, that he will take you all to great heights!”

“Change of Command is very important in making leadership positions of increasing responsibility available for our young leaders,” McCleskey said. “Mentorship of the new leaders helps both the cadets and the adults practice this important skill set daily in the conduct of squadron activities and training. I am impressed daily with the professionalism of our cadet leaders, and I know the new team will grow in their abilities as they take on new responsibilities.”

Civil Air Patrol is the longtime auxiliary of the U.S. Air Force and as such is a valued member of its Total Force. In its auxiliary role, CAP operates a fleet of 560 single-engine aircraft and 1,994 small Unmanned Aircraft Systems (sUAS). It performs about 90 percent of continental U.S. inland search and rescue missions as tasked by the Air Force Rescue Coordination Center and is credited by the AFRCC with saving an average of 82 lives annually. CAP’s 60,000 members also perform homeland security, disaster relief and drug interdiction missions at the request of federal, state and local agencies. Operating as a nonprofit organization, CAP also plays a leading role in STEM/aerospace education, and its members serve as mentors to about 25,000 young people participating in CAP’s Cadet Programs. Visit CAP.News or GoCivilAirPatrol.com for more information.